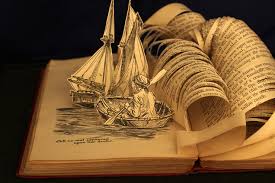 On evergreen-lined oceans
We wave cheery farewells
Teetering on the tabletop
As Neptune bucks the swells
Aboard a wooden vessel
Young sailors off to sea
Our ship, the picnic table
Beneath the willow-tree

We climb the Alps, the hayloft
Dim and dusty made us sneeze
There, Heidi and her Grandpa lived
They fed us bread and cheese
But we needed to hurry
A war was on, you see
So we scurried back to safety
Beneath the willow-tree

...where the wind tosses its tresses
As seething waters rise
We stagger on the tabletop
And hope we don’t capsize
For the sea is full of monsters
And woe if he or she
Fell to there death in foaming depths
Beneath the willow-tree

So we cling to each other
SOS, we shriek and squeal
Praying for a miracle
We crank a phantom wheel

Then we hear Mother calling
Back to reality
Its chore-time; we drop anchor
Beneath the willow-tree

It didn't look like much...just an old weathered table beneath the willow-tree, but it was a schooner and the tickets were free!

Yesterday was the first day of summer vacation for Victoria and already I've heard the words 'I'm bored'.uh-oh.

Often, in this age of gadgets and screens I find myself thinking,
‘Kids don’t play like they used to’. When we grew up our greatest toy was our imagination. I remember my mother laughing and shaking her head saying ‘what must the neighbors think!’ as we were transformed to whoever we saw in our heads. We didn’t travel much in real life but we all loved to read, these stories fueling our wildest ventures. There was nothing quite as adventurous as ‘playing pretend’…oh, the untold destinations in those words ‘let’s pretend we’re…’and beneath the willow tree the summer fell away as we carried out kitchen chairs if necessary and they became school desks and Big Sister was Teacher and we all were naughty students until she punished us with a sheet of math-facts and suddenly school was over as students stomped off in a huff. We traveled ocean-liners and trains, tamed wild ‘tree-limb horses’, became airplanes...and yes, sometimes we were so bored we thought we were going to die, but then we 'invented' a new game. Boredom's desperation fuels imagination!
Posted by Janet Martin at 7/02/2013