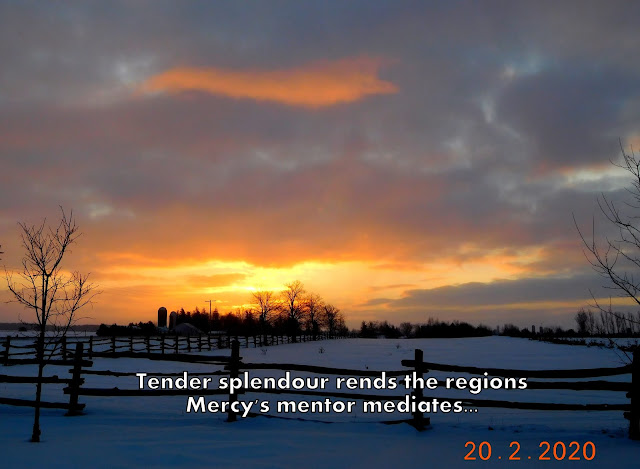 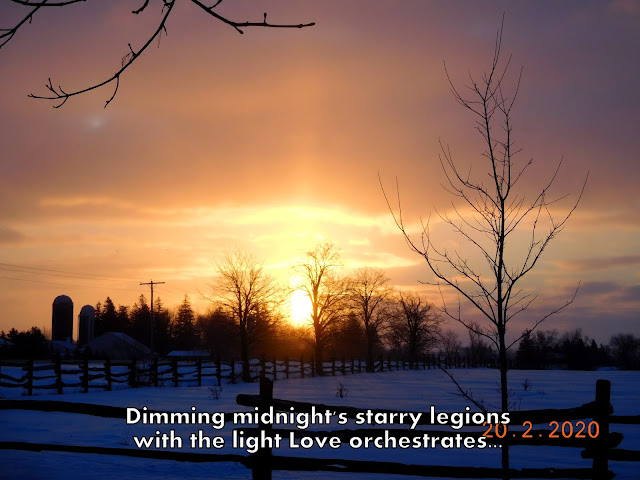 Hail, the Hand that sealed man’s pardon not withholding his own Son
Suffering death’s bitter guerdon for the sins of everyone
Hail the one who interceded when Abraham obeyed He
Who would offer His Son Jesus on the cross of Calvary

Love groans with atoning power where deception’s lies run bold
While Heaven counts down the Hour when all nations will Behold
Look! Compassion’s rose-gold raiment bathes the breadth of sea and sod
Look, where Mercy suspends Judgement like a love-letter from God

"It is not the throne of judgement yet, we still approach the throne of grace",
our pastor tenderly entreated/reminded us on Sunday
in this message...Challenge; don't be immature

Some time later God tested Abraham and said to him, “Abraham!”


“Here I am,” he answered.
2“Take your son,” God said, “your only son Isaac, whom you love, and go to the land of Moriah. Offer him there as a burnt offering on one of the mountains, which I will show you.”
3So Abraham got up early the next morning, saddled his donkey, and took along two of his servants and his son Isaac. He split the wood for a burnt offering and set out for the place God had designated.
4On the third day Abraham looked up and saw the place in the distance. 5“Stay here with the donkey,” Abraham told his servants. “The boy and I will go over there to worship, and then we will return to you.”
6Abraham took the wood for the burnt offering and placed it on his son Isaac. He himself carried the fire and the sacrificial knife, and the two of them walked on together.
7Then Isaac said to his father Abraham, “My father!”
“Here I am, my son,” he replied.
“The fire and the wood are here,” said Isaac, “but where is the lamb for the burnt offering?”
8Abraham answered, “God Himself will provide the lamb for the burnt offering, my son.” And the two walked on together.
9When they arrived at the place God had designated, Abraham built the altar there and arranged the wood. He bound his son Isaac and placed him on the altar, atop the wood. 10Then Abraham reached out his hand and took the knife to slaughter his son.
The LORD Provides the Sacrifice
11Just then, the angela of the LORD called out to him from heaven, “Abraham, Abraham!”
“Here I am,” he replied.
12“Do not lay a hand on the boy or do anything to him,” said the angel, “for now I know that you fear God, since you have not withheld your only son from me.b ”
13Then Abraham looked up and saw behind him a ramc in a thicket, caught by its horns. So he went and took the ram and offered it as a burnt offering in place of his son. 14And Abraham called that place The LORD Will Provide. So to this day it is said, “On the mountain of the LORD it will be provided.”
Luke 23:33-46
When they came to the place called The Skull,d they crucified Him there, along with the criminals, one on His right and the other on His left.

34Then Jesus said, “Father, forgive them, for they do not know what they are doing.”e And they divided up His garments by casting lots.f
35The people stood watching, and the rulers sneered at Him, saying, “He saved others; let Him save Himself if He is the Christ of God, the Chosen One.”g
36The soldiers also mocked Him and came up to offer Him sour wine.h 37“If You are the King of the Jews,” they said, “save Yourself!”
38Above Him was posted an inscription:i
THIS IS THE KING OF THE JEWS.


39One of the criminals who hung there heaped abuse on Him. “Are You not the Christ?” he said. “Save Yourself and us!”
40But the other one rebuked him, saying, “Do you not even fear God, since you are under the same judgment? 41We are punished justly, for we are receiving what our actions deserve. But this man has done nothing wrong.” 42Then he said, “Jesus, remember mej when You come into Your kingdom!”
43And Jesus said to him, “Truly I tell you, today you will be with Me in Paradise.”
The Death of Jesus
(Psalm 31:1-24; Matthew 27:45-56; Mark 15:33-41; John 19:28-30)
44It was now about the sixth hour, and darkness came over all the land until the ninth hour.k 45The sun was darkened,l and the veil of the temple was torn down the middle.
46Then Jesus called out in a loud voice, “Father, into Your hands I commit My Spirit.”m And when He had said this, He breathed His last.

Balance-beams of Beauty and Happiness 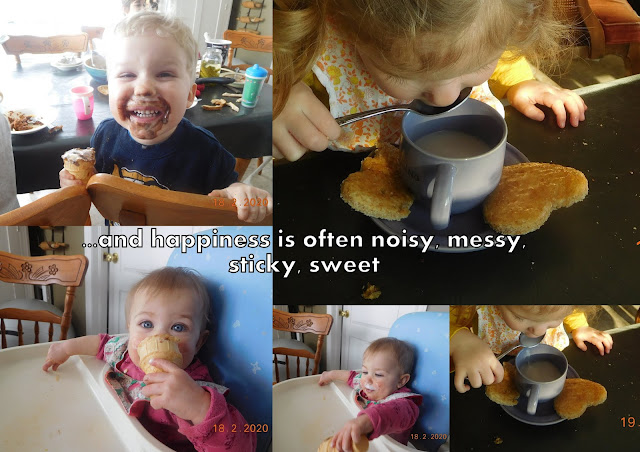 …and happiness if often noisy, messy, sticky, sweet
A room where boys and girls dash through with dream-worlds in their feet 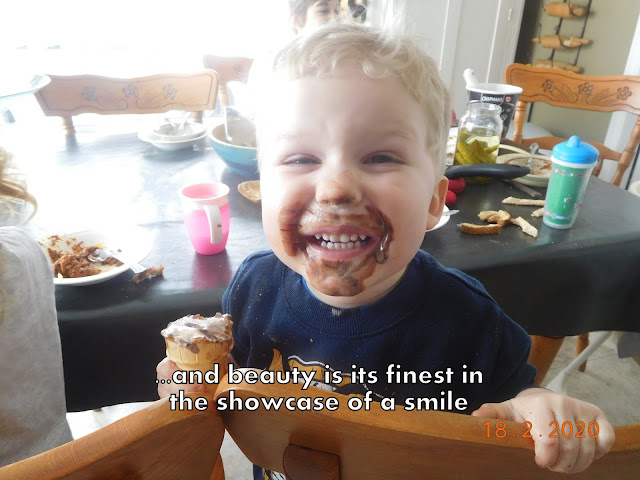 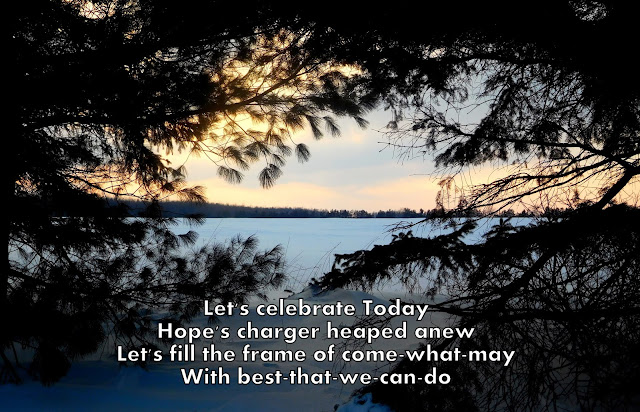 Let’s use what mercy loans
With prayerful, careful thought
And recognize time’s stepping-stones
For all that they are not

Where He never forsakes
Us, for He loves us so
Let’s use today to celebrate
His grace whereby we go

I can do all things through him who strengthens me.
Phil.4:13

The First and Final Word 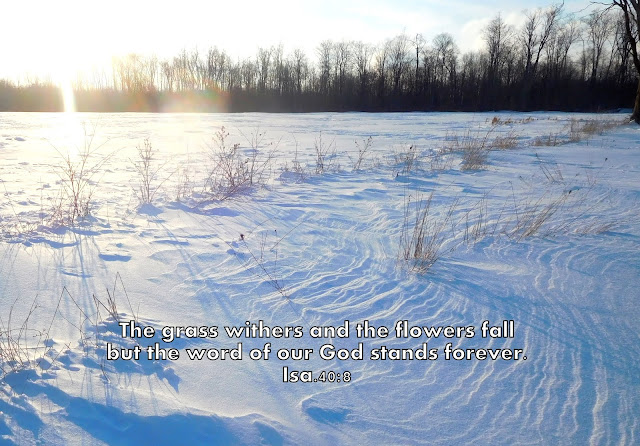 God’s Word, righteous and glorious
Perfect, eternal, true
It makes His love alive in us
Like nothing else will do

It equips, completes, trains, sustains
Corrects and edifies
Though all else fails, still IT remains
To make the simple wise

A branch, when severed from the vine
Is a dead, fruitless thing
His Word is the faithful lifeline
To which the branches cling


1 Thessalonians 2:13
And we continually thank God that in receiving the word of God from us,
you did not accept it as the word of men, but as the true word of God--
the word now at work in you who believe.

So then faith comes by hearing, and hearing by the word of God.
Romans 10:17


Every Scripture is God-breathed and profitable for instruction, for conviction,
for correction, and for training in righteousness,
so that the man of God may be complete, fully equipped for every good work.…
2 Tim.3:16-17

Regular routines have been derailed a bit the past few days/weeks.
I didn't forget about Thurs. what's-for supper etc.
In fact, this poem (if I remember correctly)was started for that purpose.
but my family prefers if I must choose between the two, that I choose cooking, not writing.
Because you can't (literally) eat a poem!
and because I was really looking forward to sharing the Jamaican Jerk Chicken Recipe
(from my friend's daughter's Cooking Through Generations blog)
here is the supper from last  Thursday's never-completed post... 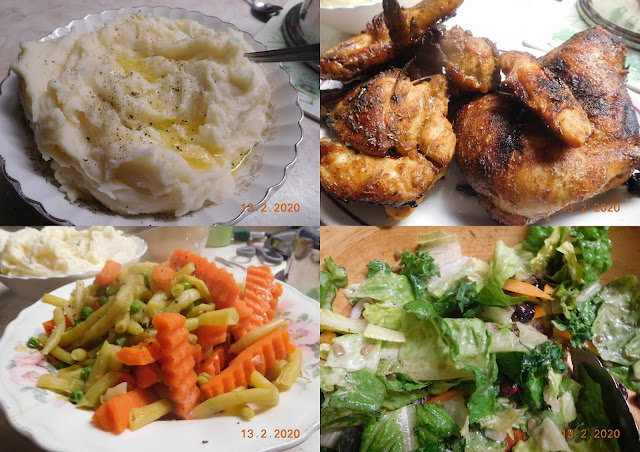 But, because supper will never be enough to satisfy certain hungers
Here's to flavours not found in your cookbook!

I’ve tasted through the tracery of ink pressed into poetry
The glory of the written word like salt-spray from a surging sea
The ambiance of bygone days like echo-extract, bittersweet
The timbre of farewell poured from a flask to rain-strummed lane and street

I’ve tasted summer in the middle of frigid February
Darling, this is the glorious gift of ink arranged in poetry
Ah, can’t you catch a hint of wild mint wafting from brook-banks below
Or muted essence of moments falling in apple-blossom snow

Labyrinthine of ink- cuisine is not a fast-food gulp-and-burp
Charcuterie of poetry is to savour like fine dessert
Aw, let’s not hurry so although there is always too much to do
Let’s linger longer; taste the lyrics of love's precious me-and-you

The bard has left for taste and touch (in books and such) a grand buffet
But weaves in it the sense of never enough hours in a day
To spell the whole of heart and soul leaves poets always on the verge
Of verse, to try to snare some remnants of life’s wonder-flavoured splurge 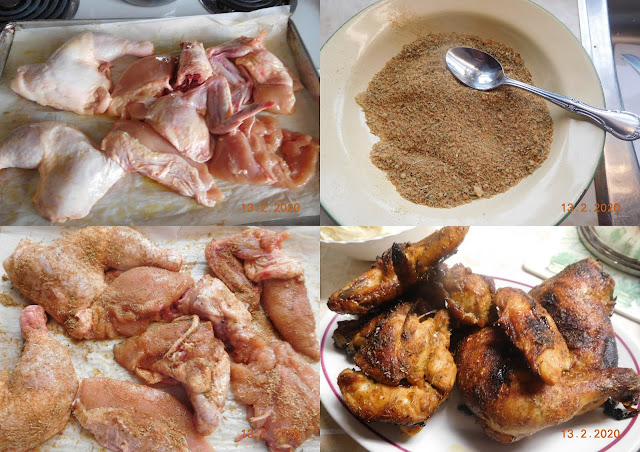 I didn't have drumsticks so I cut up a small chicken , mixed seasonings,
rubbed it on and baked
Easy, quick,
nutritious and delicious!
My favorite kind of cooking!