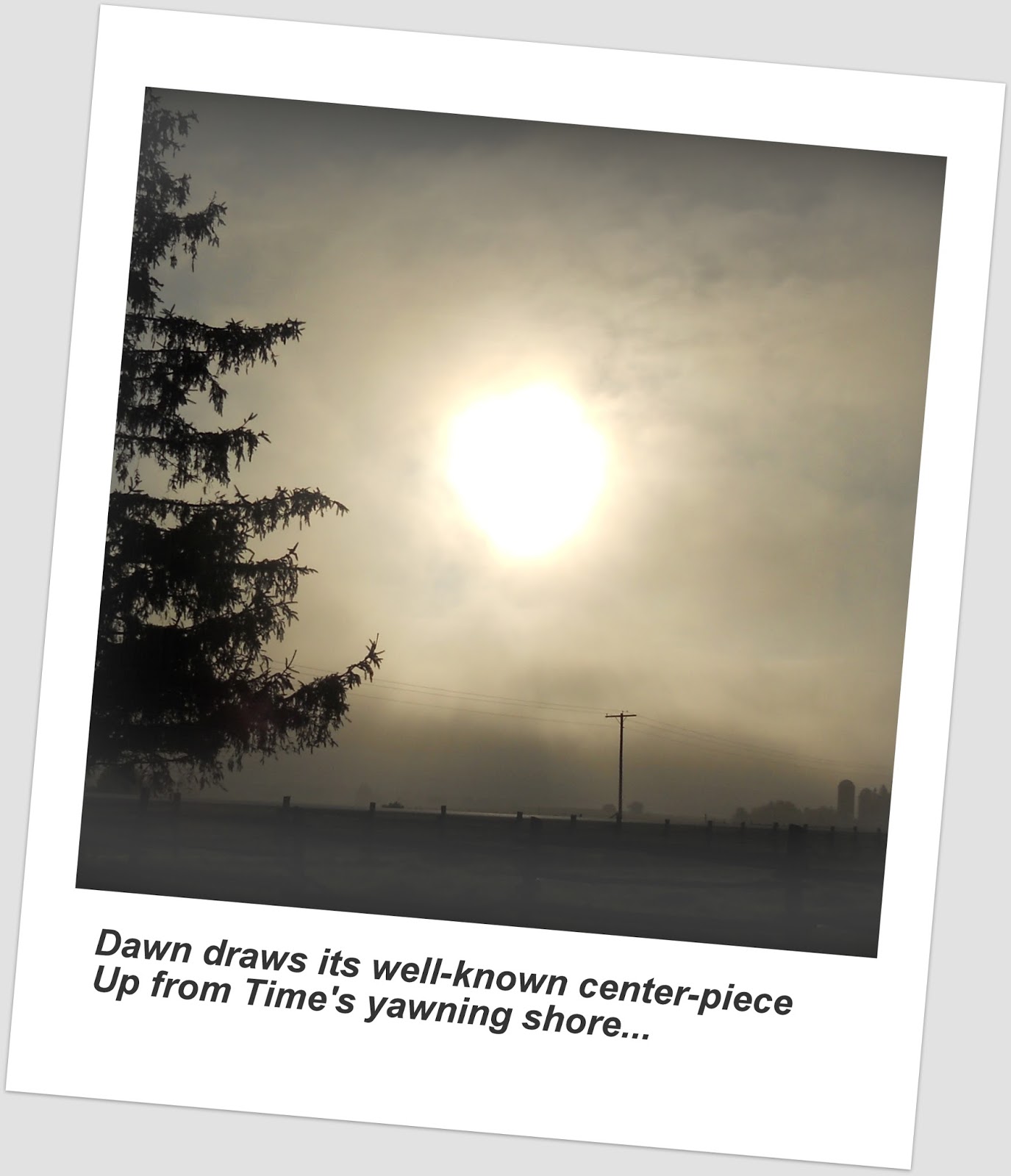 Be kind, oh tick- and-tocking leap
Bestowal of God’s grace
This little thing we cannot keep
Spills into our embrace

And oh, before it is no more
God grant that we have tried
Not to increase our earthly store
But on time’s other side

For soon the wind that combs Time’s fields
Will still; we’ll rise to meet
Where none can see what death reveals
Of treasures at God’s feet


Lay not up for yourselves treasures upon earth, where moth and rust doth corrupt, and where thieves break through and steal:  Matt 6:19

This is an excerpt from a text from someone who is there!

Christian, lift Thy banner high
Raise a universal cry
Prayer drives through camps demon-shod
To the one who hopes in God

Christian, who will faithful be,
Suffering on bended knee?
Love is greater than the sword
None are greater than our Lord 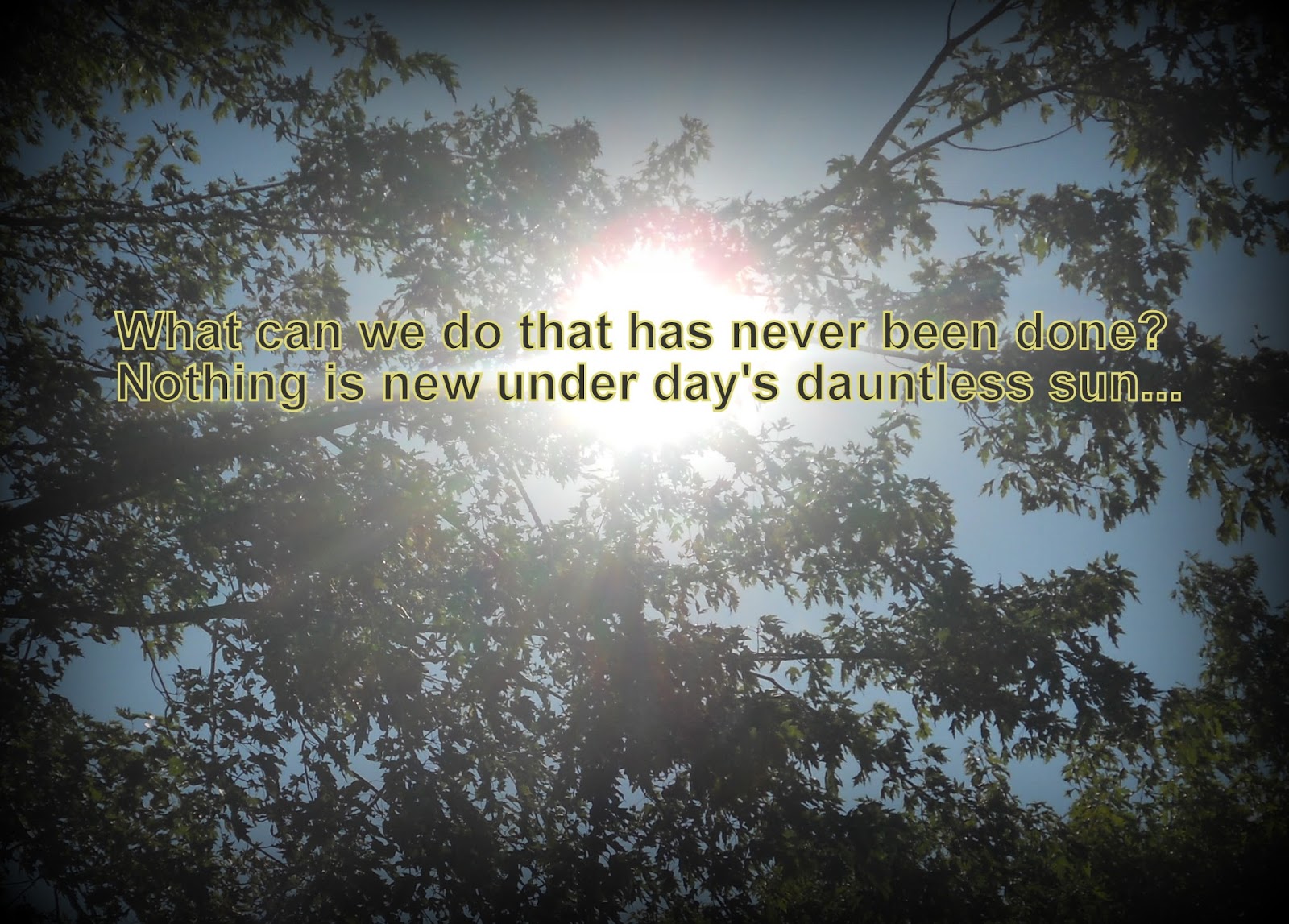 What can we say that has never been said?
Early the morning creeps out of its bed
Easing through acres of high sky-blue mead
Before its slips to the river
Kissing Time’s silver with shivers of blush
Ever it fades into precious ‘what was’
Where none can plunder its Why and Because
Or pluck one plume from its quiver

What can we do that has never been done?
Nothing is new under day’s dauntless sun
Pirate and poet, proprietor one
Led by the law of an hour
Season-stoked spectrum of age-old distress
We stumble over its heaped happiness
Searching for something we cannot access
Save in the grave of a flower

What can we think that has never been thought?
Over and over the hour is taught
By the behavior of earth’s sundry lot
As we persist to discover
Time cuts a trail over trampled bygone
While we insist to repeat right and wrong
Always half-kissed by the words of a song
God prints on petals of clover 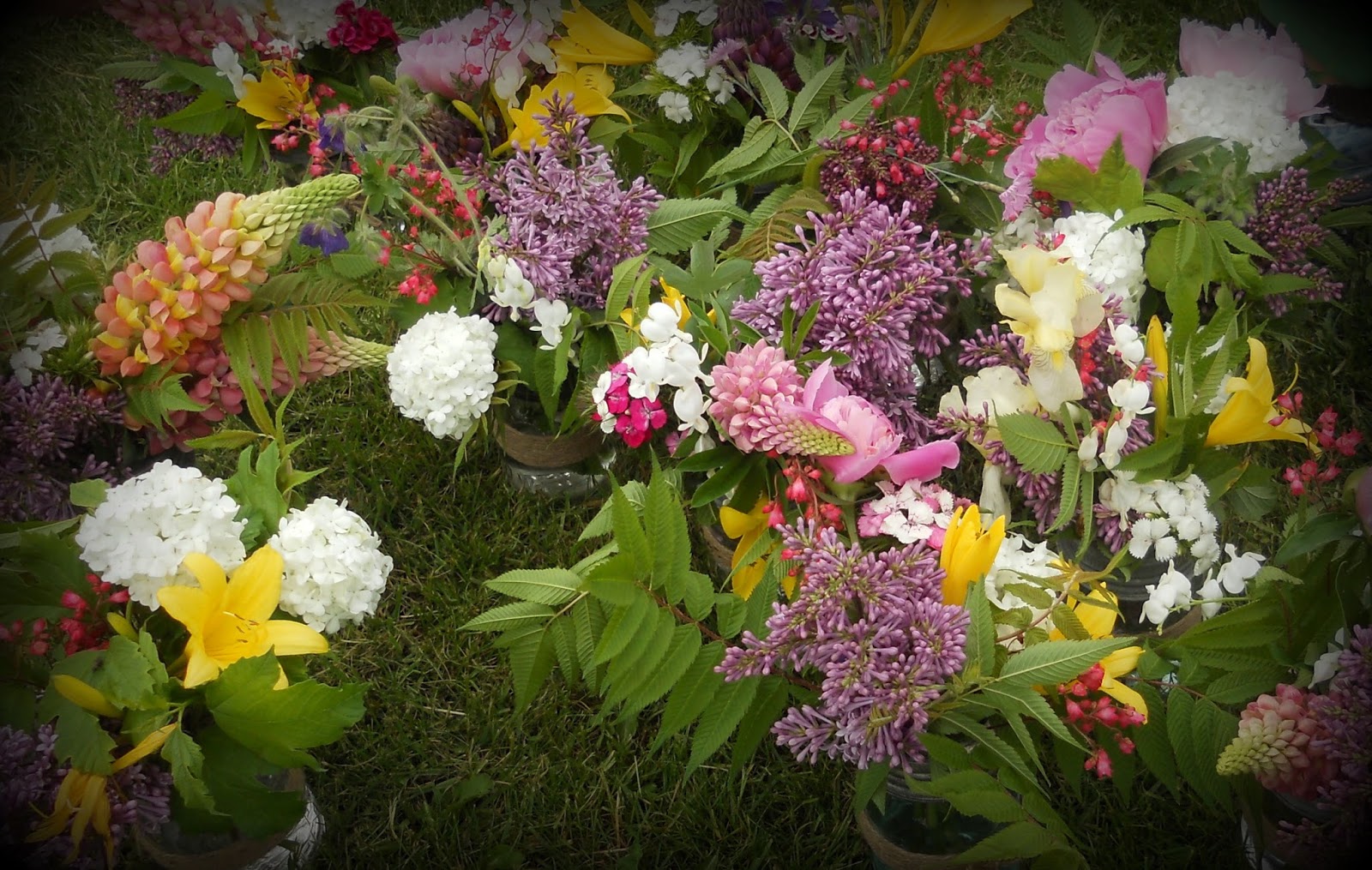 For the Eyes of Wiser Risers Only 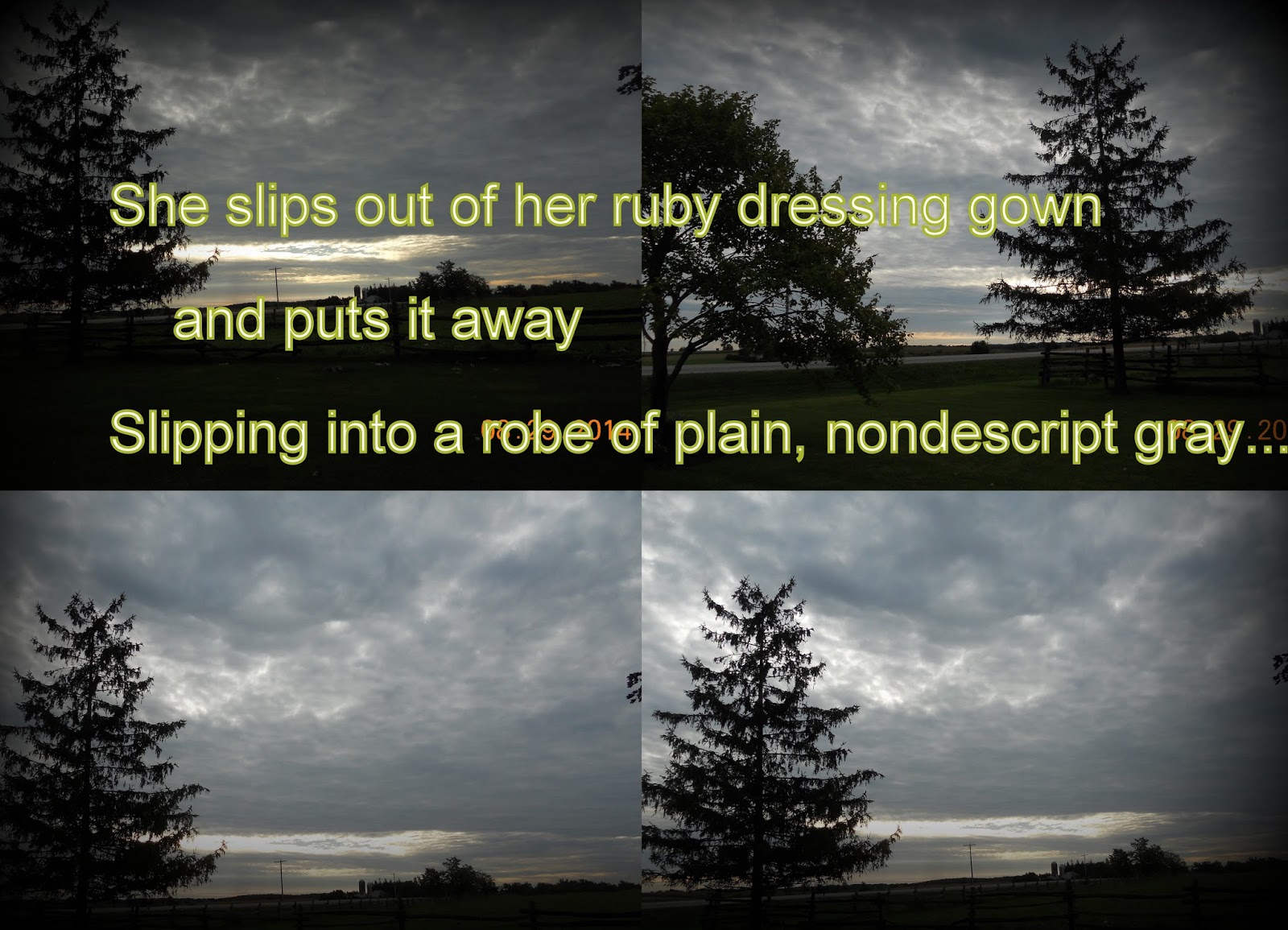 So, just in case we’re thinkin’ while we’re snugly sleepin’ in
That in the grand design of time we didn’t miss a thing
We ought to reconsider while we sweetly dream or snore
Beyond the bliss of ignorance God opens up a door
…and for those wiser risers He spreads out a wondrous feast
A decadent arrangement of daybreak upon the east
While dreamers dream and snorers snore and lazy loafers laze
Beyond that pile of blankets God sets waking skies ablaze

The only reason I can write this is because I had to get up early to finish some canning or I too may be among those getting up later, yawning, stretching and saying to myself, ‘well, at least I didn’t miss any sky-action this morning’. 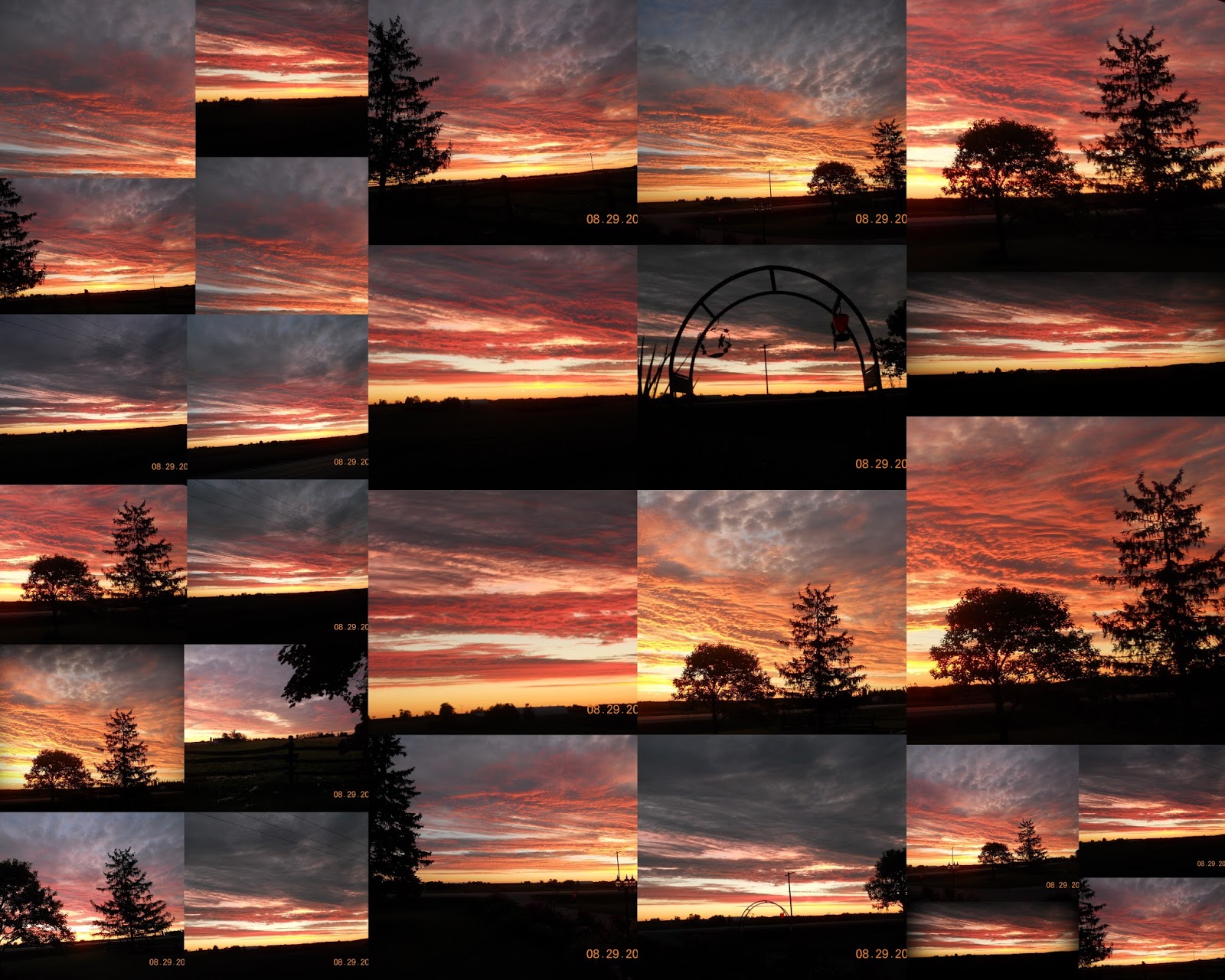 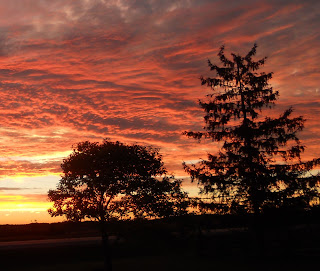 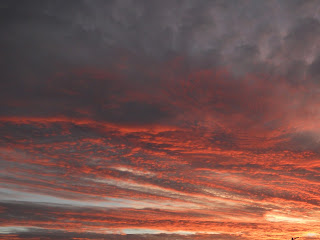 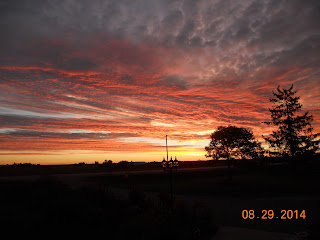 The heavens declare the glory of God; the skies proclaim the work of his hands...Ps.19:1

Oh, matrix of yon skies
Oh, heaven-madrigal
No lens or pen descries
The fullness of it all

Then God said, let there be
And from that outer-where
A glimpse of majesty
Embellishes the air

I kept clicking more and more photos trying to capture the 'It' factor, when suddenly it dawned on me no pen or lens can fully descry I AM 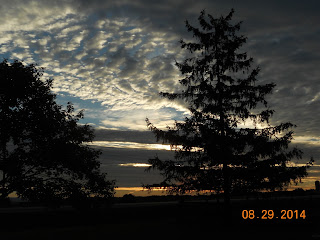 The heavens declare the glory of God,
and the sky above proclaims his handiwork.
Day to day pours out speech,
and night to night reveals knowledge.
There is no speech, nor are there words,
whose voice is not heard.
Their voice goes out through all the earth,
and their words to the end of the world.
In them he has set a tent for the sun,
which comes out like a bridegroom leaving his chamber,
and, like a strong man, runs its course with joy.
Its rising is from the end of the heavens,
and its circuit to the end of them,
and there is nothing hidden from its heat.