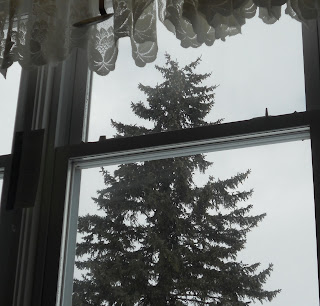 Bit of a chuckle just now as Victoria lay on the kitchen floor and said, ‘from this angle it could be summer, cause all I can see is green on the tree. No snow!’

We are having a snow day in the area with buses cancelled; not much snow so far. My hunch is it’s more of a ‘hockey day’ than a snow day. I know some places that are letting their guys quit early to catch the game in Sochi between Canada and the U.S.A.

This is not intended to be glib but relating to our trite complaining grounds…I know some people who are dealing with life’s big stuff one step at a time and even what they can make of it hurts. ((hugs/prayers))