T'was The Night Before Superbowl 2014 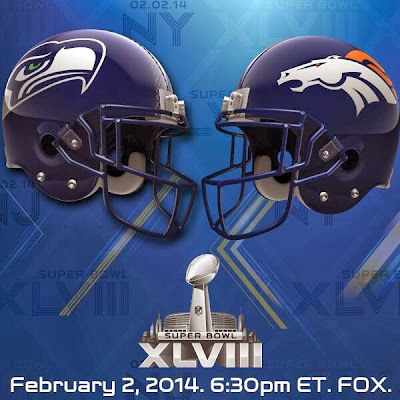 Having a little fun with my friend Jen tonight:)

T’was the night before Super-bowl; all through the house
Cushions were collected for the floor by the couch
The big screen was polished with uttermost care
Then turned to be certain there would be no glare
For t’would be a sad pity to miss carelessly
The touch-down that clinches the Vince Lombardi trophy
While mama makes chili and brownies and bread
Visions of Broncos celebrating danced in her head
She was fussing over last-minute touches a bit
Making sure everyone would have somewhere to sit
When there rose in the next room a most horrible clatter
And she rushed in to see what awful thing was the matter
The room weighed with dread of an impending storm
Though the furniture glistened in fresh polished charm
There was more to the ominous, electric air
‘cause Dad, he was perched on the edge of his chair
He looked like a cross between bear and giraffe
While son was nigh purple from trying not to laugh
So with hands on her hips she demanded, ‘say, tell
What could be the reason for such a blood-curdling yell
Why the neighbors must wonder ‘bout the crazies next door’
And ‘for goodness sakes will someone tell me, why the roar?’
Then Senior stood up with an ominous growl
While son couldn’t help it; he began to howl
With laughter, incensing the victim of rage
Papa circled like a tiger prepared to sprint from his cage
Then he roared, I have failed as a father, Miz Mox
My son is a fan of the Seattle Sea Hawks
I fed him and clothed him and taught him to throw
The long kick, the tackle, interception…you know?
But tell me how could I have missed this, my dear?
Somehow I neglected to teach him how to cheer
His head drooped, shoulders slumped, ire a-spent
The grandfather clock clucked in tick-tock lament
When suddenly he rose up to his full middle-age height
‘By junipers’, he shouted, ‘everything is all right!
Bring on the nachos and chili, my friends
Because tomorrow night here is where it all ends
On Manning, on Welker, on Decker, on Koppen
On Thomas and Caldwell, on Holliday, Johnson
Bring on the tackle, the rush, the touch-down
Let Hail Mary pass be the star in your crown
For son, let me tell you, fans might be choosers
But in every game there are winners and losers
And soon you will learn it, I have no doubt
It's all over but the crying when the clock runs out
Tomorrow night son, tears will wash your face clean
When the Broncos win Superbowl 2014