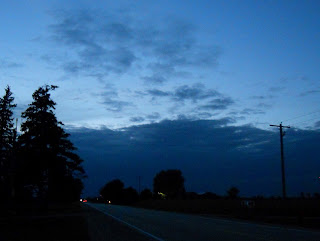 The acoustics are muted; tinged with musk
Arabesque canticle filling the dusk
Mournful madrigal; a hallowed hymn
This is the hour of summer’s requiem

Soundless, it drips from the edge of the earth
Slipping to vaults of intangible girth
Deeper and deeper its purple-blue shroud
Merges with mantle of midnight’s first cloud

Quivering quiet; its swan-song is still
Darkness descends over hollow and hill
Echoes of laughter cajole the dark limb
Tuning the ‘after’ of summer’s requiem

She slipped away early...in a gown befitting the occasion; blue, very deep blue.