The Tale of a Man Named Lou who Taught us Red is Blue... 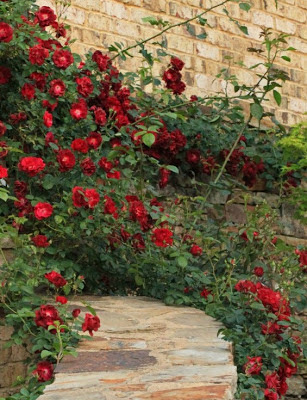 Once, in a land of Lubadoo
There lived a man that folks called Lou
Now Lou, in everybody’s eyes
Was perceived to be very wise
And often times with nodding head
They all agreed to what Lou said.

Lou lived in a gray castle tall
And roses climbed the old stone wall
In lovely red, year after year
The bloom of roses would appear
And many paused to gaze in awe
At the red roses that they saw

One day in restless discontent
Lou stopped to smell their perfumed scent
He shouted, “Hear what I’ll tell you
These red roses are really blue!”
Folks shook there heads at what Lou said
For how can blue one day be red?

But Lou walked up and down the street
And every day he would repeat
That what was red is really blue
And slowly folks agreed with Lou
For wasn’t Lou still, after all
The wise man in that castle tall?

…and visitors are mystified
To hear folk speak with love and pride
At these blue roses; how they’ve grown
Year after year against the stone
For no one here remembers Lou
Or wonders that red is not blue


The moral of this little tale
Is simply this; Truth does not fail
Though generations come and go
The truth remains unchanged and so
Before we teach that red is blue
We should make sure that it is true

The inspiration for this poem came about in  few ways. Yesterday at my nephew’s wedding my brother told me he was searching my blog for a poem for his daughter to recite at school.
‘Oh, no,’ I said, ‘did you find anything? There is not a lot for kids on my blog!’
He grinned, ‘it was tough but eventually we found one that we both agreed on’.
…then, this morning my two older daughters and I had a pretty intense discussion on truth, faith, grace and the differing views that people have. I suddenly remembered something my dad said years ago, ‘truth is truth. Time and what people say does not change it, but if an untruth is taught long enough it will seem as truth, be taught as truth, believed as truth, but the truth remains; it is still an untruth.
God’s word is truth; ‘though Heaven and earth pass away my words will never pass away’.

My daughters and I agreed; what we believe must be tested by that which was, is, and ever will be Truth; God’s Word.

Do your best to present yourself to God as one approved, a worker who does not need to be ashamed and who correctly handles the word of truth. 2 Tim. 2:15

Email ThisBlogThis!Share to TwitterShare to FacebookShare to Pinterest
Labels: poems for kids, truth