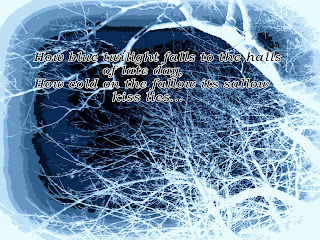 How blue twilight falls to the halls of late day
How cold on the fallow its sallow kiss lies
Its stark invitation to put toil away
Calling where autumn is closing its eyes
Gentle, the mantle of scarlet and gold
Drifts from our visage to cradles of dirt
Muted mosaic enfolded and rolled
Into Time’s nevermore where echoes flirt
With love’s appointments and whispers of loss
Juxtaposed here in autumn’s albatross

Hollows are laden with autumn’s last rose
Nature relinquishes its neon tears
Brittle, they scuttle in huddled repose;
Death is a sleep without hours or years
Life is a ladle from whence seasons drip
Dusk is a pool at the end of a day
Here in late autumn how swift skylines tip
Tucking to darkness earth’s stripped overlay
Here in late autumn its late day is bent
Heavy; a levy of Past’s firmament