Merry White Christmas!!
(getting up early to put on a turkey meant a few hours of quiet reflection) 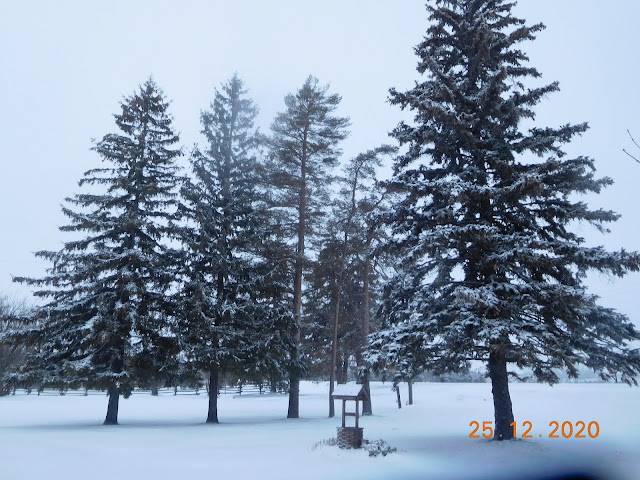 Sometimes I look at my children and think,
'do you have any idea how MUCH I love you?!!'
Sometimes I wonder if that's what God thinks
when He looks at His children/us!
'do you have any idea how MUCH I love you?!!'
He certainly did all He could to prove it, didn't He?!!
Now it's up to us how we choose to reply
Fernando Ortega- Joy to the World
Lo, unto us is born the Victor of the grave
Hail, on this blessed morn the One who is mighty to save
Behold, the hope of man through love that does not fail
But broke the bond that Eve began, so death cannot prevail
Sing, for a King IS come, not on royal display
But lying in a trough among the beasts, upon the hay
Oh come, and come with haste like the shepherds of old
Follow the Star unto the place where Humble Faith beholds
The gift, from God to man, that Bethlehem received
To set in motion Mercy’s plan that Calvary achieved
Where crowned with cruel thorns and stripped of dignity
Beaten amidst hurrahs and scorn then nailed upon a tree
His suffering, horrible, and as his life-blood flowed
He paid in full, once and for all the awful debt we owed
But death could not contain Jesus, the son of God
A rock could not constrain the Rock of Ages to the sod
Then sing with renewed joy, the victor of the grave
Sing, for no power can destroy the One, mighty to save
Forbid, forbid we hear of what God gave for us
Then turn a cold and careless ear rejecting Him, Jesus
Forbid we turn away, choosing His wrath instead
Of love, who that first Christmas Day knew all that lay ahead
Lo, unto us is born the Victor of the grave
Hail, on this blessed morn the One who is mighty to save
© Janet Martin
As I listened to the glorious passage below, last night
I was utterly smitten with sorrow for the joy that is rejected by so many.
Rejection is different than being ignored or forgotten.
Rejection is deliberate!
Yet SO many choose to reject the Saviour of the soul,
choose to reject the One a heavenly host of angels heralded,
choose to reject the One who, with limbs nailed to a cross
wept It, (redemption's work) is finished and died for us
so when we die we may live!
Choose to reject Jesus for whatever pleases them instead!
My prayer this morning is that we read this passage in Luke 2
and a new Light dawns in all of us to draw us to Him
in holy adoration!
Luke 2:1-20 NKJV
Christ Born of Mary
2 And it came to pass in those days that a decree went out from Caesar Augustus that all the world should be registered. 2 This census first took place while Quirinius was governing Syria. 3 So all went to be registered, everyone to his own city.
4 Joseph also went up from Galilee, out of the city of Nazareth, into Judea, to the city of David, which is called Bethlehem, because he was of the house and lineage of David, 5 to be registered with Mary, his betrothed [a]wife, who was with child. 6 So it was, that while they were there, the days were completed for her to be delivered. 7 And she brought forth her firstborn Son, and wrapped Him in swaddling cloths, and laid Him in a [b]manger, because there was no room for them in the inn.
Glory in the Highest
8 Now there were in the same country shepherds living out in the fields, keeping watch over their flock by night. 9 And [c]behold, an angel of the Lord stood before them, and the glory of the Lord shone around them, and they were greatly afraid. 10 Then the angel said to them, “Do not be afraid, for behold, I bring you good tidings of great joy which will be to all people. 11 For there is born to you this day in the city of David a Savior, who is Christ the Lord. 12 And this will be the sign to you: You will find a Babe wrapped in swaddling cloths, lying in a [d]manger.”
13 And suddenly there was with the angel a multitude of the heavenly host praising God and saying:
14 “Glory to God in the highest,
And on earth peace, goodwill[e] toward men!”
15 So it was, when the angels had gone away from them into heaven, that the shepherds said to one another, “Let us now go to Bethlehem and see this thing that has come to pass, which the Lord has made known to us.” 16 And they came with haste and found Mary and Joseph, and the Babe lying in a manger. 17 Now when they had seen Him, they made [f]widely known the saying which was told them concerning this Child. 18 And all those who heard it marveled at those things which were told them by the shepherds. 19 But Mary kept all these things and pondered them in her heart. 20 Then the shepherds returned, glorifying and praising God for all the things that they had heard and seen, as it was told them.
Oh, Little Town of Bethlehem- Jim Reeves
Is There Room In Our Hearts For Jesus
Posted by Janet Martin at 12/25/2020