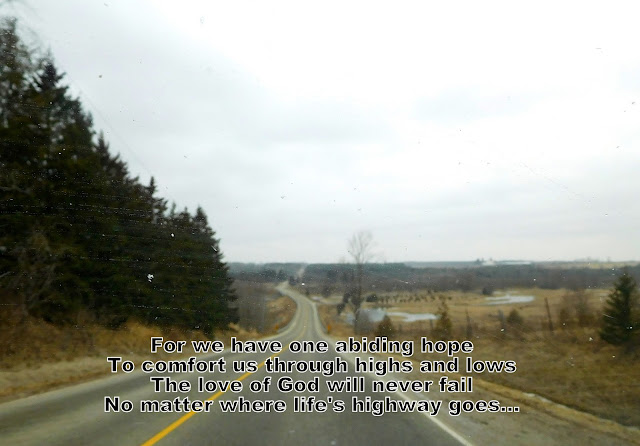 There is no door back to before
No U-turn, hon, on life's highway
No button to undo the done
No let’s-go-back-to-yesterday

There is no ‘starting over’ here
We’re all in the same one-way race
One foot and then the next, my dear
While clinging to the Hand of grace

I counted the prayer requests in my in-box...a lot!!!
Imagine if we had to go the road or sea of life alone!
When life's storm tosses our 'ship'
He calls to us "peace be still"

On the same day, when evening had come, He said to them, “Let us cross over to the other side.”  Now when they had left the multitude, they took Him along in the boat as He was.
And other little boats were also with Him.
And a great windstorm arose, and the waves beat into the boat, so that it was already filling.
But He was in the stern, asleep on a pillow.
And they awoke Him and said to Him, “Teacher, do You not care that we are perishing?”


Then He arose and rebuked the wind, and said to the sea, “Peace, be still!”
And the wind ceased and there was a great calm.
But He said to them, “Why are you so fearful? How is it that you have no faith?”
And they feared exceedingly, and said to one another,
“Who can this be, that even the wind and the sea obey Him!”