Over these past years of doing childcare I think most of the youngsters learn that Janet can be ‘nice’ and silly, turning into a cow, dog, pirate, pioneer, waitress or whatever else the day calls for ,
but that same Janet can also be Sergeant Janet and when she gets that certain look
and gives marching orders, well, you
Just.
Better.
March! 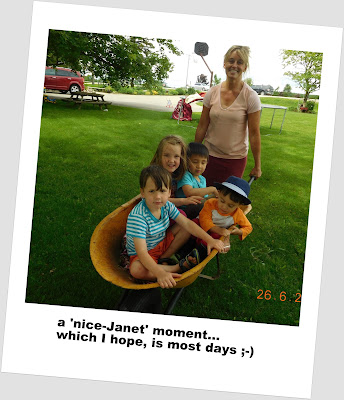 Sometimes this reminds me a little of God and us... We want God to be ‘nice’ and He is!
He loves us so much He sent His Son to die for us to break sin’s curse, death;
and to all who believe in Him He grants everlasting life.
But as much as God loves us He hates sin; the thing that separates us from Him!
He never, ever hates the sinner but always the sin!
So, just as we give our children ‘marching orders’ for their good and benefit,
He gives marching orders/laws for our good!
(but He is no Sergeant. He commands but does not demand. He never forces our obedience or love)

Why are we reluctant to yield to One who loves us so?
We live in a broken world. But we have a Healer!
If we believe in the faithful, loving, holy, kind, merciful, righteous, redemptive God,
the Father of our Lord and Saviour Jesus Christ
who was obedient to death, even death on a cross!
By His stripes we are healed!

Below is the story I read to the kiddos today...
it evoked earnest 3 yr. old declarations of love for Jesus
From The Bible in Pictures for Little Eyes... 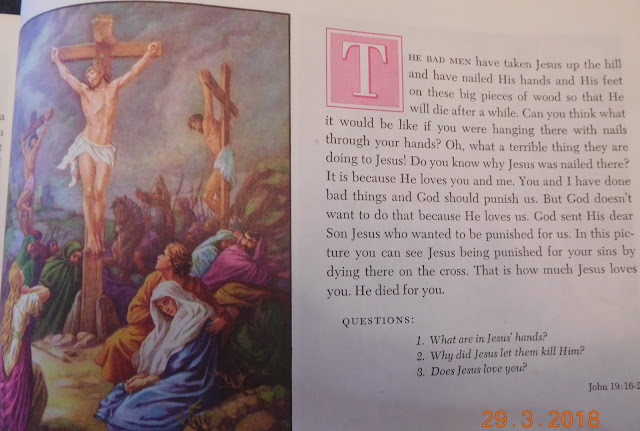 There is no other name
Whereby man can be saved
Jesus, Jesus, absolves death’s claim
On mortal souls engraved

That hope, eternal life
No fear in death for we
Who, when we leave this world of strife
Know just where we will be

But he was pierced for our transgressions,
he was crushed for our iniquities;
the punishment that brought us peace was on him,
and by his wounds we are healed.
Isa.53:5

Have you believed in Him.
Have you confessed that you are sinner to he who is faithful and just to forgive our sins
and cleanse us from all unrighteousness?
If you have then Hallelujah,
If you have not, it’s not too late to call on Him and be saved from His righteous wrath to come!
Have you walked through the Easter Story absorbing the sorrow, the blows, the loneliness, the pain
And then the triumph?!
He didn’t just die!
He rose from the grave and just as He rose from the grave so also will all who believe!