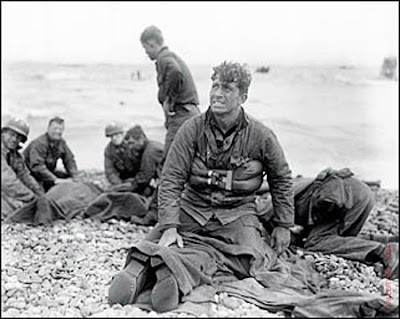 The rhythmic swish of the dark ocean waves

Conceals the horror of uncharted graves

Over lost tombs in decade-pleated deeps

Where once lay man with a prayer and a gun

As shell-fire and smoke and bloody tears fell

Bathing the shore in red rivers of hell

Nostrils burning with the grim stench of death

Time; precious yearning in every breath

As hatred and love and grief are laid bare

In volleys of terror piercing the air

Twixt strident reality and her kiss

The rise and pitch of after and before

Launches the dying to a one-man war…

There is no glory in war; it may seem

As if its stories are simply a dream

Though they may emit a teardrop subdued

Or feelings of anguish and gratitude

Can we reignite what seems to be lost?

An appreciation for freedom’s cost