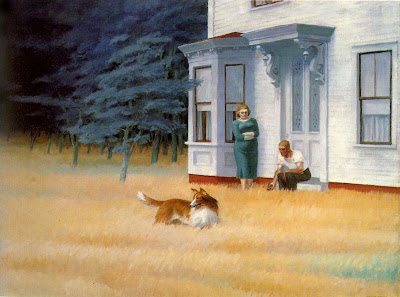 Amelia has prayed and pleaded and cried

For somehow the Charlie she knew has died

She holds him close when the dark thunder rolls

There are no words with power to console

Or wipe the scenes from his tormented mind

For where Charlie goes, she remains behind…

The shades are drawn to subdue the daylight

But they cannot shade the mind from his plight

The sun is warm with scent of pinewood

He shivers, inhaling the stench of blood

Her master is home, it’s a perfect day

He lifts his arm; suddenly he braces

For the explosion of grenades and faces

Lassie looks back, trying to understand

Why Charlie won’t throw the toy in his hand

But she does not hear the planes distant hum

Or marching feet to the beat of a drum

She cannot see the horror-stricken tears

Of mangled and wounded as gun-smoke clears

Her skin does not ache with memories of blood

Covering the earth in a sickening flood

Darkened by images burned in his eyes

The woods, once tranquil and sweet with romance

Speak only of fear in his haunted trance

Memories of lying in its cool dark shade

Are frames of terror as history is made

When they told her he made it, Amelia cried

Now she still weeps for her Charlie has died