The Joy Faith Fixes Eyes Upon...Inspired by a bunch of rambunctious little boys! 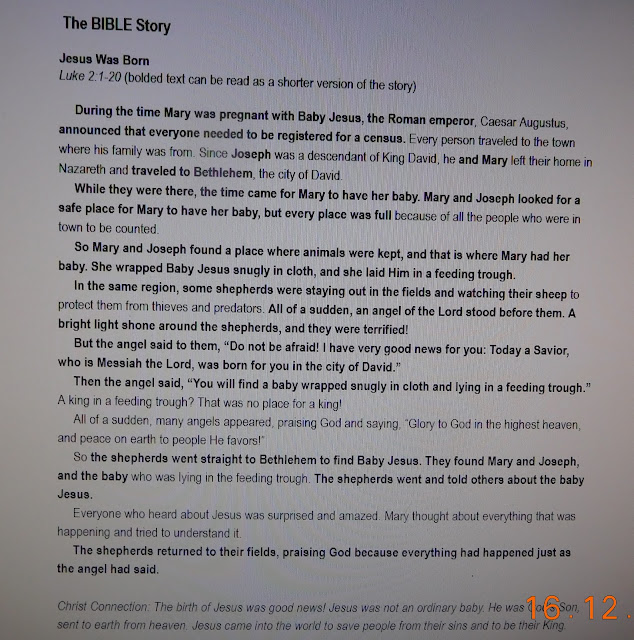 In Sunday School I teach a class of boys ages Gr.1-3. Above is the story of yesterday's lesson.
Why was Jesus born? I asked after story-time.
'To save us from our sins', came the prompt reply
(just as they were told during story-time when asked the same question)
But so what? I challenged them (having previously discussed that sin is all  bad stuff/disobedience)
Why does Jesus have to save us from our sins?
Why do we need a Saviour?
At first they were stumped then one volunteered 'so we can go to Heaven when we die!'
Yes! So we can go to Heaven when we die.
The shepherds believed even before they saw what the angels said.
We believe too even if we can't see. We call that faith!
So I pressed them further. "why is it so important that we believe?
If we miss Heaven, is that a big deal? What happens if we don't believe?"
There was silence for a little then one boy said
"I think you go somewhere else when you die or you're just dead".
'No', interjected another. 'you go in a lake of fire"
Yes! I said soberly. We do not like to think about it or talk about hell but that is the opposite of Heaven and that is what makes this Christmas story so, SO AWESOME!
Jesus came to save us so we don't have to got to hell.
Sin dooms us unless we have a Saviour and that Saviour is Jesus!
That is why this is such an important and Wonder-full story to tell and know!
That is why Christmas is the best!
Jesus was born.
Our Savior!
Our way out of hell!
Our way into Heaven!

After everyone left one little boy who is quite new to our class stayed behind .
He said, I always liked Christmas because it's Christmas, you know?
but now that I know all about Jesus I like it even way, way more, you know?
then he dashed off.

So to all 'teachers and preachers' aka moms, dads, grandparents etc...
let's keep on telling the good News of Jesus
for it is His will that not one soul should perish!

The Lord is not slow in keeping his promise, as some understand slowness.
Instead he is patient with you, not wanting anyone to perish, but everyone to come to repentance.
2 Pet.3:9

The poem below can be read in singular stanzas as small poems
or as one whole!

Repentance and belief; the crux of pardon’s benefit
For ‘whosoever will believe’ is God’s prerequisite
The evidence of faith is hid as yet until the toll
When stars will fall like withered leaves; the sky rolled as a scroll

We all must choose and will, whether with intention or not
With final exhale we inherit then, what choice begot
Made while grace poured in mercy-streams unfettered, full and free
To save the soul from sin’s reward for all eternity

The Joy faith fixes eyes upon is more than star-dust, oh,
This blip of this and that will soon insist that we let go
Then, only then, will we behold, as if Time never was
The face of He who saves us by His grace, Jesus, Jesus

Tell me, does anybody know when their last breath will be?
Inhale, exhale, sacred affair with but one guarantee
That every eye will see Him; King of Kings and Lord of lords
As Belief or Rejection both receive their just rewards

Whoever comes to Him Jesus will never cast away
Ah, it is not for naught He came to Bethlehem, a babe
He put on flesh to suffer every hurt mankind has known
The crown of thorns, scourged, pierced with sword, the cross He bore alone

The prize faith fixes eyes upon not one of us can win
A Saviour unto us was born; God’s grace saves us from sin
A gift, unearned and undeserved by all who will receive
The promise of eternal life if only we believe

It is hard to condensed such an immense topic into a blog post:)

Here are some verses to help clarify the Beautiful Love of God
John 3:16-21


And this is the verdict: The Light has come into the world, but men loved darkness more than light, because their deeds were evil. Everyone who does evil hates the Light, and does not come into the Light for fear that his deeds will be exposed. But whoever practices the truth comes into the Light, so that it may be clearly seen that what he has done has been accomplished in God.”