After June...Is it July 2nd already?!


I wrote this poem earlier and now already it is afternoon!
Click on image to enlarge... 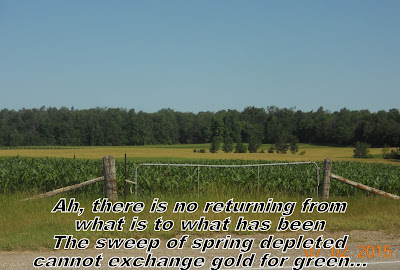 Ah, there is no returning from what is to what has been
The sweep of spring depleted cannot exchange gold for green
The well of youth is soon run dry though daily moments drench
Its wink with opportunity and thirst time cannot quench

This slipping drip of sky rouses both sorrow and delight
As we grasp at its bubble-sphere of morning holding night
For soft the morn bobs forward until it is afternoon
And afternoon wafts into past’s blue bayou; After June

Email ThisBlogThis!Share to TwitterShare to FacebookShare to Pinterest
Labels: July