Victoria asked me if it's cold today, as she got out of bed and I told her, 'not as cold as it was in the dream I was dreaming when the alarm went off'! In my dream we had a big snowfall and I was marveling and saying I can't remember ever having snow like this in July!(it is cool here but not THAT cold;-) Last night when I was biking I saw a field that looked like snowfall...it was gorgeous! the farmer is a bee-keeper and he plants flower fields filled with clover, flea-bane and other wild-blooms. I've never seen a field actually planted with it! (I took a few photos but was under such severe mosquito attack I could not linger even a moment) 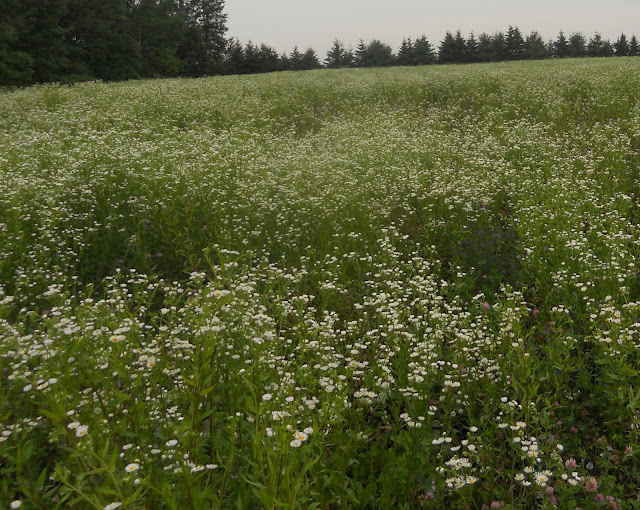 Lush frigate anchors in a sweep of summer-gentle sea
Its cargo of wild-bloom knee-deep spills rampant on its berth
Where we, the passengers that loll upon its decks of earth
Are fully spoiled to keep such fair and flawless company

This sea-breeze smells of jasmine, clover; dust and dew nuance
The fare costs ‘but an hour’; save for less-stressed tourists, three
As arm in arm, we stroll and sip freedom like fine sweet tea
And reacquaint ourselves with a long-forgotten romance

We do not carry clocks aboard this ferry; Fancy-free
The dinner-bell is pink and smells of honey; lunch is served
Wherever we can toss a quilt; its roofless awning curved
In far-off blue to earth’s edges of sedge and fantasy

Come, all aboard, the captain, namely Summer Dusk, soft-hails
And folds the banner of a sun-gold sky across a barge
Of daisy, lazy maybe-dreams; then, at no extra charge
After daylight has settled He pours stars into its sails