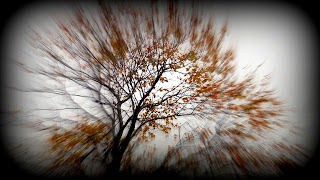 Time reaches into its pockets then flings into the sky
Its leaf, like soldered lockets filled with hello and goodbye
Man grapples with thought-pieces; squints at his enlightenment
While ignorance still reasons with Time’s season-indictment

The clock is like a shepherd where its tick-tock flowers spill
Like sheep into a pasture swiftly stripped of summer-twill
He herds his flock of hours into days, then months and years
Beyond a Gate; futile to wait; Past never re-appears

Yet, ever easy-going Time sprawls on empyrean slope
To watch his newborn offspring spin a tiralee of hope
Where earthlings scramble, he ambles, knowing though we take-take
His pockets never empty and his lockets never break

The pull of seasons never wanes; September shuts her eye
Its lullaby of leaf-song rains and drains the sighing sky
It weeps beneath the wanderer, whimpers where sense beguiles
In echoes of a simpler time; Time tamps his pipe and smiles