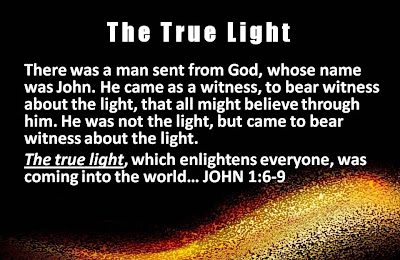 We behold Him even now

Though we cannot comprehend

The fullness that His love bestowed

As He put on flesh for men

He put on thus, meek flesh for men

This One that Is, before Time was

Conceived, not of the will of them

But by the holy will of God

And by the holy will of God

He brought true light upon the earth

This true Light remains till now

As testament and Living Word

As testament and Living Word

Full of mercy, hope and grace

A proclamation such as this

A proclamation such as this

Power to become His sons

Cleansed from all unrighteousness

Washed in the blood of heaven’s One

Washed in the blood of heaven’s One

His Light remains to lead the way

And we still have His Word today

We still have His word today

But oh, to those who have believed

He dwells within the heart of them

I was reading John 1 this morning.

One of my favorite passages, not only at Christmas

He is the True Light.

I’ve been pondering this True Light since I read Vivinfrance’s poem the other night.

Then Mary wrote about the mother Mary and as I thought of Mary's humility and acceptance of God’s word it convicted me. We have His word still, full of grace and truth and Light. He is the True Light.