Holy, Holy, The Wake at Stake


And I looked, and behold a pale horse: and his name that sat on him was Death,
and Hell followed with him.
Rev.6:8

Whoever believes in him is not condemned, but whoever does not believe stands condemned already because they have not believed in the name of God's one and only Son.
John 3:18 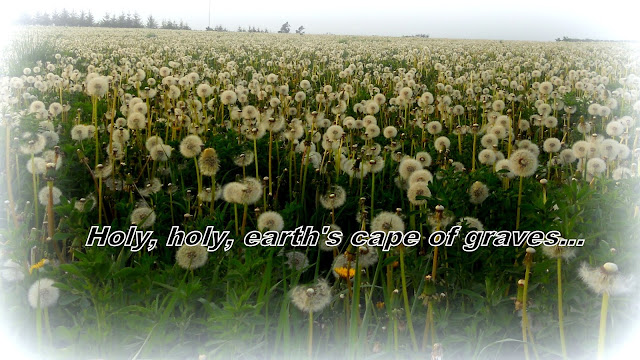 Holy, holy earth’s cape of graves
Vulnerable, the foot that braves
Faith and fear’s yawning, conning waves
Help us, oh, help us, Lord
For we are prone to quench thirst’s yen
With lowly rise and fall of men
Where bluffing, boasting brogue of pen
Is mightier than sword

Pity, pity pride’s witty want
Enticing us to trust its taunt
Where enmity to honor flaunts
Its masterpiece of lies
And undiscerning eyes believe
What ignorance does not perceive
The awful end sin will receive
With devils in disguise

Laden with grace, soul’s maiden trek
Where life on earth is but a speck
Before the More that waits on deck
After The Choice we make
Tender, tender God’s mercy pours
Where splendor groans on hidden shores
While compassion and justice wars
Heaven or hell at stake