The Reason For The Season, Jesus or Santa? 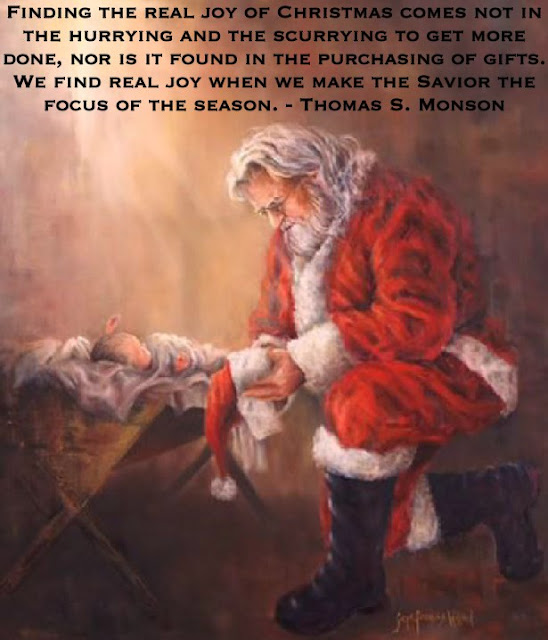 She looked like an angel in her red coat
With white scarf tied, snug and warm at her throat
Soft snowflakes sparkled on her golden hair
In her hands she clutched a small teddy-bear
Crowds hurried by, their thoughts on the morrow
Ignoring the girl burdened with sorrow
It shone in eyes as she gazed at a sled
Where-on sat a jolly, old man in red

The laughter of eager-eyed girl and boy
Could not fill this sad, little girl with joy
She watched as they climbed on the old man’s knee
To tell what their wants and wishes would be
Far-off the bells from the tall church steeple
Hailed to the sidewalks crowded with people
As fading daylight and dusk-frosted air
Fell 'round the girl with the teddy-bear


The man didn’t see her ‘til the crowds dwindled
As folk rushed to warmth of home-fires kindled
Then, at last he beckoned to the little girl
Who seemed to carry the weight of the world
With all of its trouble on her wee shoulders
And Santa knew he needed to hold her
–to query what caused her young heart to grieve
On this greatest of nights, this Christmas Eve


Timid, she approached his gift-laden sled
“Come, don’t be afraid” the jolly man said
“It’s your turn now and I think you’ll be
The last child this year to sit on my knee
Come now and tell me what troubles you so
This is the best night of the year, don’t you know?”
So, onto his lap she gratefully snuggled
To tell dear Santa why her heart was troubled


“Well” she began “I've a question, you see”
...she paused to brush fluffy snowflakes from his knee
Then Santa pulled a big blanket around them
As Christmas Eve began to surround them
“Mama says it is Jesus who is the reason
We celebrate Christmas every season
That Santa and silly imagination
Has nothing to do with this celebration”


Silent, Santa watched silver snowflakes swirl
As he considered the words of this girl
Then in a gentle, husky voice he said
“You have a very wise mother indeed
Jesus is the reason, don’t ever forget it
Santa adds magic, perhaps if you let it
But, my dear, sweet girl, would it surprise you
To know that Santa loves Jesus too?


Jesus IS the truth and Santa, a helper
...a jolly man with presents to deliver
For to Christmas truth Santa is no stranger
All that he knows he learned at the manger
Gifts remind us of hope, peace, love and joy
Such as Heaven gave earth in that baby boy
So, my dear girl, I agree with your mother
Jesus IS the reason, there is no other”


The little girl quietly pondered his words
As she ran her fingers through his frosty beard
When suddenly she clapped her little hands
“I am so happy for I now understand!”
Then a little girl's laughter and Santa’s ho-ho
Rang out ‘cross the town all covered in snow
As they shouted with joy, “Let the world believe
Jesus is the Reason for Christmas Eve!”