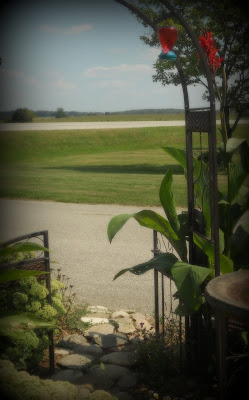 Oh mystery, no one can see
Beyond earth’s threshold or Time’s door
Nor where this brief mortality
Will fade into forevermore
No one can tell how near or far
The road extends before That Call
But this we know; this little life
Leads to the Meaning of it all

Beyond earth’s threshold and its end
Begins this thing that we strive for
Mere mind can never comprehend
Infinity’s forevermore
Oh mystery; Eternity
No one can tell its depth or height
Its span of immortality
Perplexes our mortal sight

No straining of thought’s fantasy
Can form an image to portray
The rise and fall of timelessness
When flesh and blood will fall away
But this we know; none can return
When they have passed through that last door
To tell what joy or grief a-waits
In that timeless forevermore 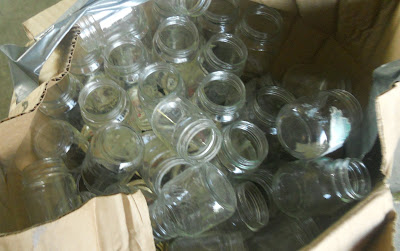 It began with a box of empty baby-food jars, this conversation with Matt, our 15 yr. old son. ‘Where did they come from?’ he wondered. 'I think they were an add-on at a yard sale purchase and they ended up in our garage', I said.
'Wouldn’t it have been easier to re-cycle?' he asked.
Then we began discussing the religious fervency with which some people recycle and why. We agreed that we want to take care of God’s earth, to be faithful stewards and we should do all we can, but we know this earth is destined to end. It will end and we thought, wouldn’t it be great if everyone were as zealous in preparation for Jesus and  forevermore. This life is but a Door to what existence is all about! and my heart burned with desire that everyone may know of The Way, the Truth and the Life before it is forever too late.

Then I thought of this parable;

The Rich Man and Lazarus

“There was a rich man who was dressed in purple and fine linen and lived in luxury every day.  At his gate was laid a beggar named Lazarus, covered with sores and longing to eat what fell from the rich man’s table. Even the dogs came and licked his sores.
“The time came when the beggar died and the angels carried him to Abraham’s side. The rich man also died and was buried.  In Hades, where he was in torment, he looked up and saw Abraham far away, with Lazarus by his side. So he called to him, ‘Father Abraham, have pity on me and send Lazarus to dip the tip of his finger in water and cool my tongue, because I am in agony in this fire.’
“But Abraham replied, ‘Son, remember that in your lifetime you received your good things, while Lazarus received bad things, but now he is comforted here and you are in agony.  And besides all this, between us and you a great chasm has been set in place, so that those who want to go from here to you cannot, nor can anyone cross over from there to us.’
“He answered, ‘Then I beg you, father, send Lazarus to my family, for I have five brothers. Let him warn them, so that they will not also come to this place of torment.’
“Abraham replied, ‘They have Moses and the Prophets; let them listen to them.’
‘No, father Abraham,’ he said, ‘but if someone from the dead goes to them, they will repent.’
“He said to him, ‘If they do not listen to Moses and the Prophets, they will not be convinced even if someone rises from the dead.’ Luke 16: 19-31

Email ThisBlogThis!Share to TwitterShare to FacebookShare to Pinterest
Labels: eternity