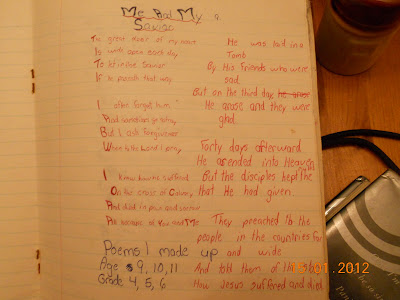 Carrie Burtt's story at Hope Whispers caused me to recall with sudden clarity when I began to write...today I was trying to decide why it is I need to write...I'm not sure I have the answer but it began when I was nine years old. I was sitting on a straw-covered step in the barn and suddenly I had a poem...a song actually to the tune of the stanza part of Rest By and By.

(I dug out the old black scribbler that holds my earliest dreams of writing) Here and there is a page with a huge X over it if I wrote it and then rejected it;))

This is the first poem I recall writing...

Me and My Savior

He was laid in a tomb
By His friends who were sad
But on the third day
He arose, and they were glad

I think the first three verses were the original poem and at some slightly later date I decided the poem/story was incomplete, hence the two columns.
Posted by Janet Martin at 1/15/2012