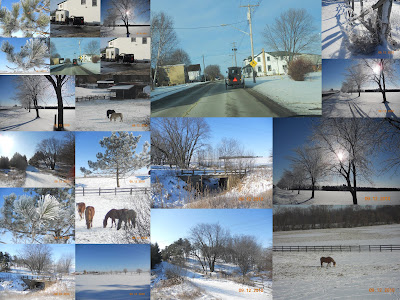 I was going to be in a hurry today
But I got distracted along the way……….
For Someone had brushed the landscape clean
With a crystal hush and a dazzling sheen
Until everything ordinary, brown or gray
Became each their own master-piece in the most spectacular way
And the little brook, just beneath the hill
To the casual on-looker appeared silent and still
But I heard it chuckle and beckon to me
Whispering softly on its way to the sea
The limb that yesterday was cold and dull
Grinned for it knew it was beautiful
The touch of a higher heavenly hand
Can make even a twig or a sprig appear grand
And as I gazed at perfect blue up above
I breathed a prayer for each dear one that I love
Even the wind was silent and still
Too lovely the morn to bring tiding of ill
Yes, I was going to be in a hurry but then
Somebody gently said, why don’t you slow down?

It really was a pretty morning if you’re
Into this kind of thing………
You know, COLD and WHITE and perfectly peaceful
Posted by Janet Martin at 12/09/2010