Wonder of Pen and Ink 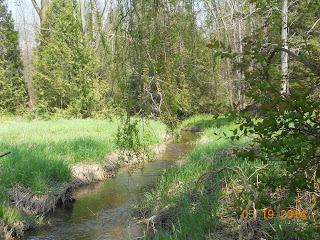 We are not chained to seasons, love
Though sprig is stripped of virile bud
Still we can walk where petals spill
Into the ambling brook at will
And we can ramble where the brook
Winds through a fern-embellished nook
Or green into a meadow laughs
Where skies scrawl azure autographs
And we can take our shoes off while
The wind is menacing and vile
And board a frigate undeterred
As pen and ink spill into word
And seal upon a humble page
Its summer though snow-barons rage
And rattle at the window-pane
Ah, soft we hear the silk of rain
Slip from the drowsing August tree
In whispers of a memory
Roused by the simple nod and wink
Through wonder of a pen and ink

Last night I read the poem The Tuft of Flowers by Robert Frost and I laughed to realize I could lean over the summer-brook bank or amble through a dewy field 'before the sun' even while the old early winter howled at my window... (don't you just love the last line in this poem?)


The Tuft of Flowers

By Robert Frost
I went to turn the grass once after one
Who mowed it in the dew before the sun.

The dew was gone that made his blade so keen
Before I came to view the levelled scene.

I looked for him behind an isle of trees;
I listened for his whetstone on the breeze.

But he had gone his way, the grass all mown,
And I must be, as he had been,—alone,

As all must be,' I said within my heart,
Whether they work together or apart.'

But as I said it, swift there passed me by
On noiseless wing a 'wildered butterfly,

And once I marked his flight go round and round,
As where some flower lay withering on the ground.

And then he flew as far as eye could see,
And then on tremulous wing came back to me.

I thought of questions that have no reply,
And would have turned to toss the grass to dry;

But he turned first, and led my eye to look
At a tall tuft of flowers beside a brook,

I left my place to know them by their name,
Finding them butterfly weed when I came.

The mower in the dew had loved them thus,
By leaving them to flourish, not for us,

Nor yet to draw one thought of ours to him.
But from sheer morning gladness at the brim.

The butterfly and I had lit upon,
Nevertheless, a message from the dawn,

That made me hear the wakening birds around,
And hear his long scythe whispering to the ground,

And feel a spirit kindred to my own;
So that henceforth I worked no more alone;

But glad with him, I worked as with his aid,
And weary, sought at noon with him the shade;

And dreaming, as it were, held brotherly speech
With one whose thought I had not hoped to reach.