Fit for Kings (the Epulaeryu) 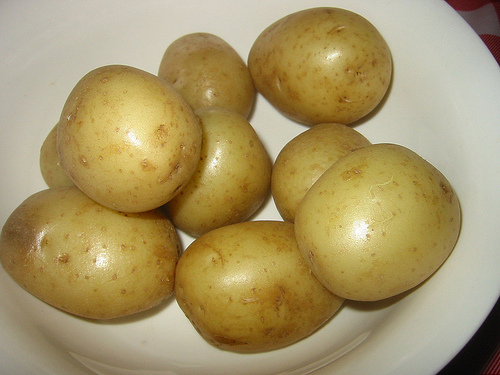 Poetic Bloomings invites us to attempt the Epulaeryu.

The “Epulaeryu” poem is about delicious food. It consists of seven lines with thirty-three (33) syllables. The first line has seven syllables, the second line five, the third line seven, the fourth line five, the fifth line five, the sixth line three, and the seventh line has only one syllable which ends with an exclamation mark. Each line has one thought relating to the main course. Therefore, this new poetic form, the Epulaeryu, which has corresponding lines built around the main course, and ending with an exclamation point, concludes with the ending line expressing the writer’s excitement and feelings about the poem.

I caught myself sighing at the thought of boiled potatoes for supper...again! My kids love them and I glimpsed a re-play of past 'boiled potato suppers' as they mashed them, adding salt or pepper and a bit of butter while laughing, arguing chattering about the day... m-m-m-m!  Love makes every meal king-worthy.