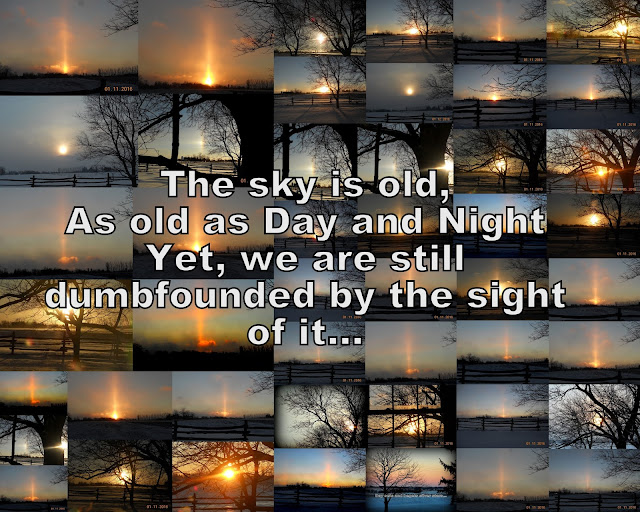 I.
The sky is old; as old as Day and Night
Yet we are still dumbfounded by the sight
Of stars, or how dawn breathes yon gates ajar
And dusk returns to gather up the light

II.
Nature does not forget; a Faultless Hand
Refurbishes the fortunes in its strand
They slumber, bedded in earth’s umber deep
Waiting to waken in Spring’s Promised Land

III.
Both morning-tide and eventide convey
A hierarchy greater than Night and Day
It decorates the dust with mighty hills
That spill blue shadows where light ebbs away

IV.
Man plans but his scope of vision is small
His grandstands hosting boast-and-toast soon fall
Like leaves beneath tall trees, their birthright spent
Where time’s attention span outgrows us all

V.
The spigot whereby mankind seeks his quaff
That God turned on and has not yet turned off
Is a Terminal and Terrible Thing
Which only fools disdain with aimless scoff

VI
Sometimes we bloat ourselves with ignorance
That clothes itself as Knowledge and we dance
In glass slippers until the clock strikes twelve
Then, suddenly we see Time’s crass romance

VII.
Ah, we should often look up at the stars
To marvel at midnight’s unbroken bars
Where words unuttered by daylight appear
In dialects not tainted by ink jars

VIII.
The resting place of seasons none can breach
Its everlasting breadth evades man’s reach
Yet as we grapple with these laws of loss
Life’s albatross renders what it must teach

IX.
This exhibition-place of greed and need
This hope-and-grace dependent human-breed
Would be a living hell of want and wish
If by its bread alone we could succeed

X.
A fool in his own eyes seems very wise
He drinks an elixir of well-dressed lies
Then forgets what manner of man he is
…a ready prey for wolves in sheep’s disguise

XI.
Go to the ant, thou sluggard; learn their ways
Lower art thou than the bug who obeys
His Maker; then, do not forfeit The Crown
By languishing too early on Death’s chaise

XII.
Hand to the plow, the spade, the pen, the broom
Already the exploit of moments bloom
Upon the midday clock that holds the key
That will unlock the Gate to God or Doom

XIII.
Did the Lamplighter of Time’s wick detail
The Very Tittle of its last exhale?
Ah yes, but not even the angels know
When He will crush to naught Time’s Awesome Grail

XIV.
Because of Calvary God made a way
For fallen man to hope through That Last Day
This groping-coping interlude of strife
That we call life is but a little Stay

XV.
Time’s tick and tock ah, gossamer transport
To a goal made for souls none can abort
Its countdown is like a holy bugle-call
‘Oh who will come and who will trust the Lord?’

XVI.
The sky is old; as old as Day and Night
And we are still dumbfounded by the sight
Of it; a drop within eternity
Come, bow the knee before God snuffs the Light