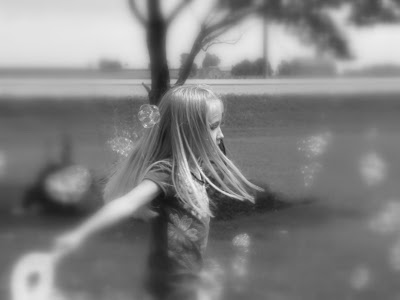 I caught a glimpse of her today
A ten-year-old bundle of laughter and play
Across the grass with a flying leap
Resting a moment where the willows weep
Blonde hair streaming and blue eyes gleaming
Inhaling the freedom of summer and dreaming
I gazed….perhaps wistfully with a hint of a smile
For I saw her today for a little while

I saw her today, timid, sixteen
Her eyes far away in the midst of a dream
So lovely and tender, unmarred by life’s churning
Her heart awakening to a girl’s deeper yearning
Tomorrow’s woman waits on the brink
As I beheld her I paused to think
And I reached out to touch her but she moved away
Yes, I caught a glimpse of her today

She passed by but life was calling
No time to sigh with idle recalling
A flick of her hand as she went out the door
Nineteen, is not a child anymore
I followed and longed to draw her back
Yet in the same moment I knew I would lack
What she now needs, so I let her go
But I saw her today for a moment or so

I saw her today for a little while
I don’t know whether to weep or to smile
It’s a mixture of sorrow and happiness
So I’ll do a little of both, I guess
For every so often, every now and then
I catch a glimpse of her again
The girl of yester-years, -no other
But I fight back the tears for I am….their Mother