Simply Memories...
some we savour and try to slow down
and some we shoo away with a mop and broom as fast as we can!

What a start to the year!
We celebrated with a flood of family and friends...and water!
It was a most memorable New Year's Eve indeed!
Monday night's downpour turned what started as a relaxed evening into a race against a river!
What a nightmare!
... from approx. 2-3:30 a.m. was the worst;
after everyone left we realized the water that was rushing in through the floor drain was picking up speed, and gaining on the sump pump, and the lower part of the basement was going to overflow which meant the whole basement would be flooded so Jim and I lugged pails and pails and pails of water up the steps, pouring it out the window...
we felt like sailors trying to keep the ship afloat!
But it was worth the effort and finally the gush released some of the pressure and the pump is keeping up so far; yes, it is STILL running in.
Now we need to call Mr. Fix It to get to the 'root' of the problem! 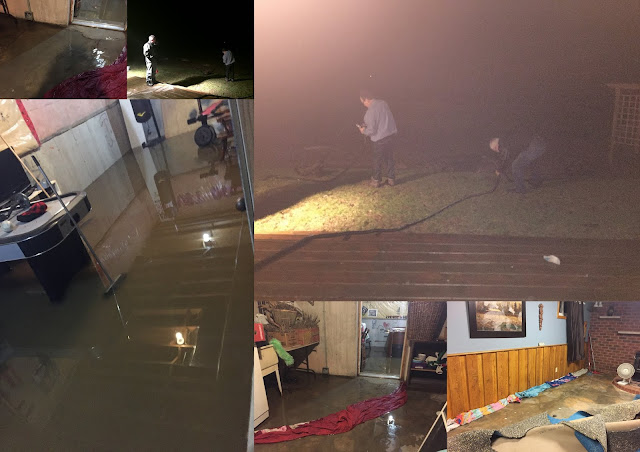 ...around midnight the men are trying to attach all the hoses
we can find to take the water as far from the house as possible!
The red quilt was a bit of a dam to channel it into the lower basement to where the pump is.

Well, I can't wait til this whole 'event' is simply part of 'remember when?'

How smooth and suave, morn’s pink and mauve
And high noon’s sun-lit bars
Slip, like a crimson disc far-off
Into a vault of stars