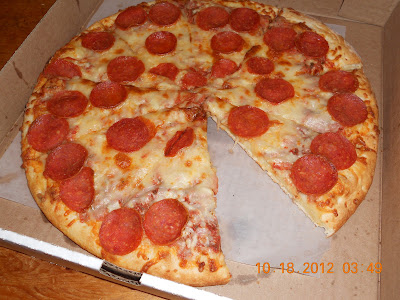 He tells me the pizza isn’t ready yet
His accent is heavy…what language? I cannot tell

He tells me not to worry about it
It doesn’t matter, he smiles

Then he tells me about the kids that come in after school; hungry
He asks them what kind of pizza slice they would like

They tell him, ‘we have no money’
He tells me how he likes to give them pizza anyhow, just to see them smile

He tells me again; ‘it doesn’t matter
It’s just money and I have enough to get by’

I tell him, 'those kids will remember you forever'
His voice is husky with emotion as he tells me 'I hope so'

He tells me then, with sudden tone change
I had two once; and a wife

He tells me about the war in Yugoslavia
Poof!  and everything he had was gone

He tells me that life in Canada is good
I ask him about his loss; how long ago?

With tears he tells me, no, it isn’t
And he tells me when I ask, his first language was Serbian

His second language was Russian; no good in Canada
He tells me he took six months of English school…

He owns two pizza shops and life in Canada is good

this happened a few hours before I wrote this. Yes, it is true.