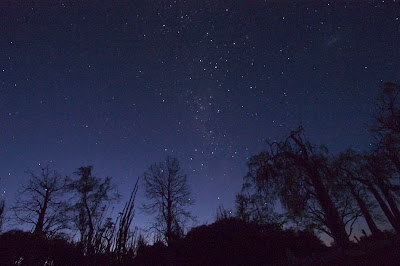 How does one justly draw with pen
The gifts of God bestowed to men?
And yet it doth quite drive me mad
To leave its pure delights unsaid
Immersed in heaven’s artistry
Surrounded by His poetry……

In the west a blazing fire lies
On tinted snow from coral skies
As in the east a deep blue surge
Over cold, blue fields converge
North winds sweep across the plain
Where once we frolicked in the rain

Then, as night lets its curtain down
The sky becomes a dazzling crown
And all that humble man can do
Is wonder, at this awesome view
As God displays above the earth
A glimpse of another universe……..

The North Star, like a sparkling gem
Gleams upon the velvet hem
Of rolling waves in purple-blue
Shadowing a lofty avenue
As the Painter in glorious perfection
Manifests Himself in heaven’s reflection

I was treated to a feast for the eyes tonight
while dropping my daughter off at a friend’s house.
Posted by Janet Martin at 1/29/2011