This...a But By the Grace of God Matter 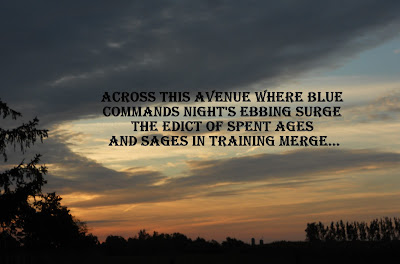 Across This Avenue where blue commands night’s ebbing surge
The Edict of Spent Ages and Sages in Training merge
And those who recognize This grapple with the undertow
Of what Eons have proven yet so many do not know
Because truth is distorted by the wily ways of Want
Resulting in Unconsciousness of Hades lawless taunt
As Right and Wrong are twisted; life a godless game of chance
Our children and their children doomed by Present Ignorance

Across This sweep of purple-misted centuries-deep dust
Religion and Discipleship spar; law argues with trust
And lust is oft mistaken for love; Love misunderstood
As many shun The Hand encrusted with Redemption-blood
Choosing upon This Way of No Escape that loathsome lie
‘That there is no accounting with Holy God when we die’
And so His Name is uttered in the context of a curse
Instead of Awed Awareness of the love of God for us

This neighborhood of human flesh is doomed; we till death’s dross
Man’s dust-to-dust appointments riddle earth where all is loss
Save This; the Promise of Inheritance we will receive
If with trite heart and soul we testify, God, I believe
But oh, This Present Generation find no pleasure in
Remembering the Creator who pardons every sin
Choosing instead The Convoluted Labyrinth of Sod
And dances with a Serpent rather than the love of God

This is the day the Lord has made, no mortal mind usurps
Omnipotent Authority; He rules Heaven and earth
Thus, all that we lay claim to on this Avenue of Laud
Is Rust Offspring and Temporal Lending to us from God
For naked we came to this world; naked we will desert
Only mankind’s Immortal Soul survives This House of Dirt
Where we would all be drunk with tears of fear, save for God’s grace
And this; A Present Ignorance pervading human race

Inspired by this poem with a multitude of breath-stealing phrases...
After I wrote This I wished I would have attempted the rhyme-scheme of the poem
that inspired it but words and rhythms seem to have a will of their own as well:)