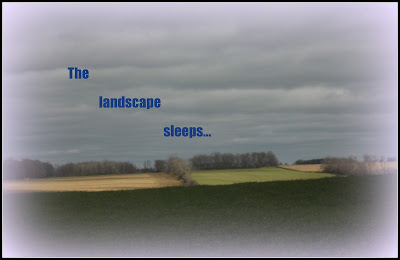 Poetic Bloomings invites us to attempt a Rondeau to day.
A rondeau (plural rondeaux) is a form of French poetry with 15 lines written on two rhymes.  It makes use of refrains, repeated according to a certain stylized pattern. It was customarily regarded as a challenge to arrange for these refrains to contribute to the meaning of the poem in as succinct and poignant a manner as possible. The rondeau consists of thirteen lines of eight syllables, plus two refrains (which are half lines,  four syllables each).

The landscape sleeps; its umber sigh
Flows to the border of the sky
It stirs the mind to reminisce
And revel in a memory’s kiss
Where precious moments lie

The tears that fell from autumn’s eye
Lines curbs and ditches; we descry
The postlude of October’s bliss
The landscape sleeps

We cannot gather days gone by
See; even now soft moments fly
To line a vast phantom abyss
For soon the past is what now is
A sweet and winsome lullaby
The landscape sleeps