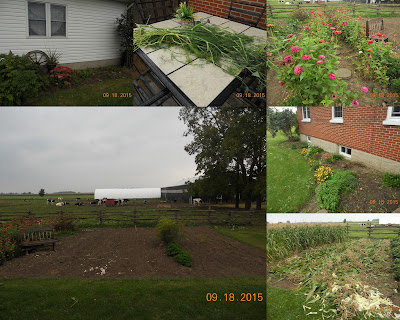 (Before the rain began I was working at cleaning summer-tatters from the gardens...I began to empathize with Her; September-summer)
September-Summer slips her hand to the crook of Time’s arm
His cue of tinted tresses is not hard to understand
Her dances and caresses are inept, she cannot charm
Him, but begins the preparation for his next demand

She does not argue though it seems she lingers tenderly
And spreads beneath the walnut tree a memento of tears
The tug of his insistence urges her passionately
But she is like a mother counting moments now, not years

Yes, she has known it all along, that it would come to this
Still, she was unprepared for the deftness with which Time flies
She tilts her chin beseeching him to postpone farewell’s kiss
He shakes his head and flower-tatters scatter in her sighs

She curtsies; the Gate-keeper stands erect and then salutes
For she is a fair lady, even in her latter bloom
Though he sees she is trembling; letting go is hard to do
But she clutches Time’s elbow like a bride beside her groom

Maturity has shaped her into more than wish and whim
Her beauty is a lady by experience refined
September-summer smiles, he looks at her; she nods to him
Then waves; her gentle laughter leaves a trail of leaves behind