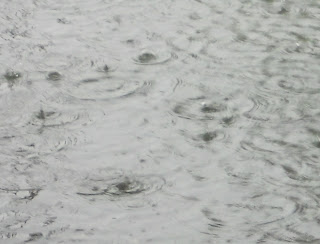 April, though famous for its fool
Unravels silver from its spool
Then every indent is a pool
And every pool a mirror
She spills and fills enchanted nook
With laughter from her unchained brook
And we forget how long it took
To quash her predecessor

I dare say  no one here is mourning her passing
and yet, April is rife with blessing... 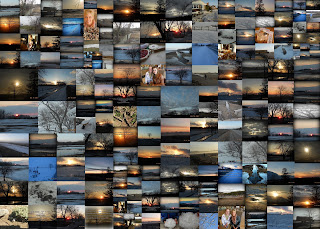 This poem was inspired as I read an oldie by Robert Frost which reminded me that April has always been like a double-minded man, unstable in all her ways ;)

Out of the mud two strangers came
And caught me splitting wood in the yard,
And one of them put me off my aim
By hailing cheerily “Hit them hard!”
I knew pretty well why he dropped behind
And let the other go on a way.
I knew pretty well what he had in mind:
He wanted to take my job for pay.

Good blocks of beech it was I split,
As large around as the chopping block;
And every piece I squarely hit
Fell splinterless as a cloven rock.
The blows that a life of self-control
Spares to strike for the common good
That day, giving a loose to my soul,
I spent on the unimportant wood.

The sun was warm but the wind was chill.
You know how it is with an April day
When the sun is out and the wind is still,
You’re one month on in the middle of May.
But if you so much as dare to speak,
A cloud comes over the sunlit arch,
A wind comes off a frozen peak,
And you’re two months back in the middle of March.

A bluebird comes tenderly up to alight
And fronts the wind to unruffle a plume
His song so pitched as not to excite
A single flower as yet to bloom.
It is snowing a flake: and he half knew
Winter was only playing possum.
Except in color he isn’t blue,
But he wouldn’t advise a thing to blossom.

The water for which we may have to look
In summertime with a witching wand,
In every wheel rut’s now a brook,
In every print of a hoof a pond.
Be glad of water, but don’t forget
The lurking frost in the earth beneath
That will steal forth after the sun is set
And show on the water its crystal teeth.

The time when most I loved my task
These two must make me love it more
By coming with what they came to ask.
You’d think I never had felt before
The weight of an axhead poised aloft,
The grip on earth of outspread feet.
The life of muscles rocking soft
And smooth and moist in vernal heat.

Out of the woods two hulking tramps
(From sleeping God knows where last night,
But not long since in the lumber camps.)
They thought all chopping was theirs of right.
Men of the woods and lumberjacks,
They judged me by their appropriate tool.
Except as a fellow handled an ax,
They had no way of knowing a fool.

Nothing on either side was said.
They knew they had but to stay their stay
And all their logic would fill my head:
As that I had no right to play
With what was another man’s work for gain.
My right might be love but theirs was need.
And where the two exist in twain
Theirs was the better right — agreed.

But yield who will to their separation,
My object in living is to unite
My avocation and my vocation
As my two eyes make one in sight.
Only where love and need are one,
And the work is play for mortal stakes,
Is the deed ever really done
For heaven and the future’s sakes.

Email ThisBlogThis!Share to TwitterShare to FacebookShare to Pinterest
Labels: April