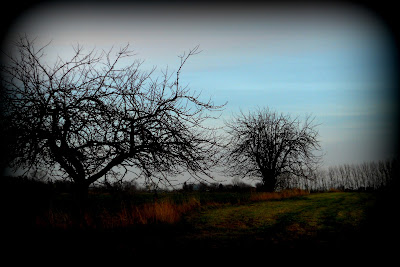 Praise Him, the meadow is stripped of its harvest
Praise Him, the orchard is plucked of its fruit
Praise Him, the chill wind roams, cold through the woodlot
Where summer’s soft leaf-song lies still at the root
Praise Him though flaunt of the garden has withered
As gray and brown pigment fills the Painter’s brush
Praise Him; the beauty of autumn’s departure
Bleeds on the landscape in somnolent hush

Praise him; His grace is not ‘but for a season’
Praise him; His hope makes our journey worthwhile
Sunshine and suffering both have their reason
The gauntlet to glory is worth every mile
Praise Him; though chill of the twilight is weeping
Tears on the windowpane, snuffing daylight
Praise Him; for safe in the Master’s kind keeping
Are all of His children; none lost to His sight

Praise Him in glad times or seasons of waiting
Wise is the blue-print of patience-wrought faith
Praise Him; though fathoms lie twixt earth and heaven
His love surrounds us in a hallowed wraith
Praise Him; the color of autumn’s abating
Settles against the backdrop of lost charms
Time treads the corridor of God’s creating
We tread the pathway that leads to His arms